The Car of the Future – Pure Energy Solutions

The Car of the Future 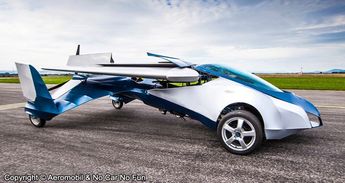 The Car of the Future!

One idea which has stuck around for generations is the image of a flying car! Whether it be Gerry Andersons’s Super Car, or Chitty Chitty Bang Bang, or Back to the Future 2, for many people a flying car is The Car of the Future!

Traditional fuels for cars are non-renewable which means one day they will be gone. In more recent years new manufacturing regulations have been put into place to safeguard the environment from pollution caused by fuel emissions.

Therefore, any true car of the future must meet with the regulations and use renewable energy resources.

Before we can start looking for the car of the future, we must first understand how cars are made and how they work.

Traditional cars run on what is called an internal-combustion engine, which is a type of heat engine. To put it simply the engine converts heat energy into kinetic energy.

The heat is generated by burning gasoline or diesel, this is then transferred to mechanical workings which causes the car wheels to move.

This is the basic principle for all petrol and diesel engines, whether it be a small hatch back, or a Formula 1 Ferrari.

However, as previously stated, gasoline and diesel create air population and contribute to green house gasses.
This is what led to the idea of electric cars.

Instead of an internal-combustion engine, electric cars run off an electric motor, connected to a battery. The battery requires charging to run. 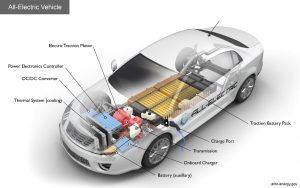 Although electricity is a renewable energy source, the batteries themselves are made of harmful plastics which cannot break down once discarded.
In general, the batteries used in a car are hard to dispose of if they cease to work. They are also very heavy.
The cars can also take up to 10 hours to charge and run out of fuel faster than gas and diesel engines. The first electric cars had very small seating areas, with most of the space taken up with the huge batteries.
There was also a problem with cords not being long enough to reach plug sockets in people’s homes. This has since been rectified with some service stations now having supercharged plug-in bays for electric powered vehicles.

To combat the problems of gas and electric powered cars, manufacturers now mass produce hybrid cars.
You have probably heard the numerous car adverts on the tv and radio talking about plug-in and non- plug-in hybrids. But what are they and how are they different?

Hybrid engines are connected to a battery; they also have a fuel line as well meaning they use a combination of both electricity and gas. Using both forms of energy, means hybrid cars are more fuel efficient as they are less reliant on gas.

Some hybrid cars come with plugs to be used at designated charging zones. Others automatically charge the batteries whilst you drive.
Hybrids are not to be confused with older car models. They also have batteries for in built computer systems such as satnav, which also charge whilst you drive. However, these batteries are not connected to the engine.
Due to the lower fuel emissions, and the ability to run on electricity as well as the tradition combustion engine, hybrids are better for the environment.
It is important to remember that they still give off harmful green house gasses as they are not able to run solely off electricity. They require both forms of motor to function.

They exist! Set to be used for commercial travel in 2023, these cars can run on the roads, as well as transforming into a plane in under 3 minutes and flying.
This is demonstrated in the following video (courtesy of Technewlogy: Feb 2015).

They have been in development for the last ten years and conform to all road and flight regulations. This means they are a form of hybrid car which is powered by a propulsion system with a turbocharged combustion engine.
For the moment there are no plans for mass production of Aero.

Monile’s or for them to be sold in showrooms anytime soon. However, in the future who knows!