What is Geothermal Energy and how does it work? – Pure Energy Solutions

What is Geothermal Energy and how does it work? 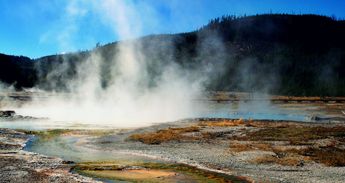 What is Geothermal Energy and how does it work?

Geothermal Energy is a form of heat energy originating from within the sub-surface of the earth.  The source of this form of renewable energy is carried to the earth’s surface by water and steam, which can then be harnessed to create electricity. The steam is created by heat from the earth’s crust warming underground water supplies which is then converted into steam. Where the earth plates meet and change, this steam can break through the earth’s crust.

The energy is gathered either from the steam emerging on the service or from underground wells.

Geothermal Energy is generated in Geothermal power plants. Due to an advance in geothermal technology there are many ways of generating power from Geothermal energy. The main methods are: Dry Steam, Flash Steam and Binary Cycle.

Dry Steam Geothermal power plants run underground pipes from sub-surface reservoirs directly to a turbine which is connected to a generator which converts the steam into energy producing electricity.

Flash Steam power plants use a pump to push hot fluid from underground into a tank on the surface. As the water cools inside the tank, it is transformed into vapour which drives a turbine powering a generator.

Binary Cycle Geothermal technology uses a giant heat exchanger where hot fluid beneath the ground heats a second type of fluid called a heat transfer fluid. Heat transfer fluid has a lower boiling point then the first creating vapour at a lower temperature. The vapour then spins a turbine powering a generator producing electrical energy which can then be transported through overground cables.

More information can be found through this video (3mins 47seconds):

They are expensive to install: Geothermal ground sources require drilling and installation which means for a household it can cost around £13,000 to £20,000 to install. The process also requires the household to have land or a garden next to the house, making it impractical for those living in a city, town or small residence.