Permafrost - Why Is It A Problem? Pure Energy Solutions 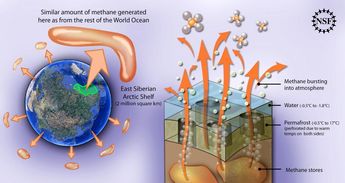 We have all seen the cracks in the soil which occur during extreme frost. In the areas where permafrost occurs these types of cracks signify underlying instability in the landscape which can result in serious geological damage resulting in landslides. But what is Permafrost? Why is it a problem? Where does it occur and what effect does it have on the environment?

Permafrost is a layer of pre-historic ice dating back to the last ice age. Huge lakes of permafrost rest beneath the earth surface, ranging from a depth of 5m-150m underground.

Why is it a Problem?

Most of the problems relating to Permafrost occur when deforestation and homes and other infrastructures are built over or near to these areas. These problems occur because over time crack appear on the earth’s surface. The cracks then become flooded due to rainwater which then freezes during winter, causing the cracks to expand. Over time (sometimes after many centuries) these cracks lead to land erosion and other problems.
Other issues arise when temperature underground increase, causing some of the permafrost to melt, thus making the ground unstable. Rivers and lakes, surrounded by thawing permafrost can disappear as water seeps through underground cracks and even become displaced elsewhere.

The most common issues are: 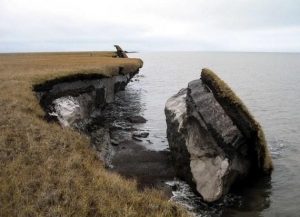 The following map shows the areas of Permafrost and the lighter the blue the more at risk the area. This lighter blue corresponds with the areas with the most human interaction.

What is the effect on the environment?

When Permafrost thaws, green house gasses such as CO2 and Methane are realised into the atmosphere.

These gasses become trapped and produce heat in the air, which causes more permafrost to thaw which in turn releases more CO2 and Methane into the atmosphere.

The following diagram illustrates this point in more detail:

The best way to avoid these problems is to not build on areas where Permafrost is close to the surface. The way to achieve this is by measuring the temperature below ground, during summer.
Normal ground temperature will be higher than permafrost which will have a below C reading all year round.

Another solution is to stop deforestation.