How to save with Energy saving Light Bulbs – Pure Energy Solutions

How to save with Energy saving Light Bulbs 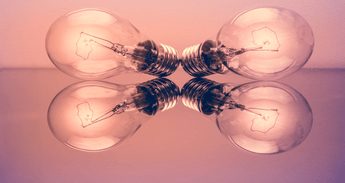 Simply put: an energy saving light bulb generates artificial light using technology which enables them to use less energy than a traditional filament burning lightbulb.
The most popular forms of energy saving light bulbs use between 70% and 85% less energy than traditional light bulbs, meaning they last much longer and cost less to run. These light bulbs include Light Emitting Diode (LED) and Compact Fluorescent Lamps (CFL). We will be looking at both these forms in more detail further down.
Another popular type of Energy Saving Light Bulb is Halogen. The popularity of Halogen energy is largely to do with price. They do not contain mercury making them much cheaper than CFL. However, they are less efficient in emitting light.

The easiest way to calculate the amount of energy you can save is by looking at the number of lumens per watt rating, which tells you the standard of brightness. This is found on the box of every light bulb.
For example: CFL and LED give around 50-70 lumens of light per watt. Halogen give up to 20 and old incandescent bulbs may reach 15 lumens per watt. To put it simply CFL and LEDs last much longer and burn brighter. According to Which a single energy saving bulb can save a consumer on average £30 over a five-year period.

New technology has brought massive changes to the production of both CFL and LED light bulbs.
In the past CFLs took a long time to warm causing their lights to be dim. Now with the creation of the more common spiral form, this is no longer an issue.
CFLs are very adaptable, most of the bulbs have been designed to fit the original household fittings. They are also cheaper to produce than LEDs, meaning they are also cheaper to buy.
This is all set to change however, with new technologies using silicon instead of sapphire LEDs are becoming more competitively priced.
LEDs do not contain filament which means they are not subject to damaging so easily.
When used in torches, batteries have been proven to last 15 times longer with LEDs than with traditional bulbs.
LEDs last up to 10 times longer than CFLs and 40 times longer than traditional bulbs.

LED bulbs are the most environmentally friendly. They do not contain mercury which means they do not cause heat build-up or wasted energy, making them more cost efficient. The costs of producing LEDs have reduced due to better and more efficient manufacture.
LEDs are also ideal for use with solar in off-grid areas because they are less expensive than running a traditional cable.

There are many different forms of LED bulbs. They also come in a wide range of colours depending on their purpose.
For the most cost-efficient LED light bulbs we would recommend our partners, Ideal Lights. Ideal Lights were established in 2005 with the aim of combining the lasted LED technology and material to create and supply “low-energy, long-life, environmentally friendly, retrofit LED lighting solutions”. Their bulbs are the best on the market, both in terms of cost and lumens per watt rating.
But don’t take our word for it. Visit their website: https://www.ideallights.co.uk/

Pure Energy Solutions is here to help you if you are worried about increased energy bills during the Coronavirus pandemic. Contact Us for a free quote for switching energy providers, or to find out more about installing solar power in a residential or commercial setting.