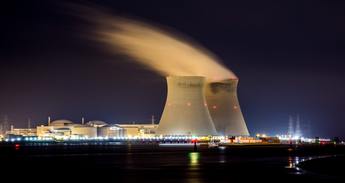 What is Nuclear Energy and where does it come from?

Nuclear energy is stored in the centre of an atom called the nucleus. Whilst stored in the nucleus this potential energy is given the name atomic energy, which is also one of the most powerful forms of energy. The energy is released through a process known as nuclear fission, or to use the colloquial term, splitting the atom.

How does it work?

When a nuclear reaction takes place (the splitting of an atom) smaller atoms are released, which form heat and radiation on a massive scale.
The heat is then used to boil water, the vapours can then turn turbines converting the heat energy into electrical energy.
This electrical energy is then transported through cables into people’s homes. This is considered to be one of the most efficient methods of producing electricity, it is also easy to simply add more power as and when required.

Nuclear energy of itself is renewable in that it is harvested from atoms. Once it has run through the national power grid it transforms back into steam to be recycled back into electrical energy.
However, the materials used in storing and harnessing this type of energy are not renewable. The fuel to power the machines to control the nuclear fission comes from the element uranium which must be dug out of the earth. Not only that, but the type of uranium used- U 235- is exceedingly rare. This will be a problem in the near future as uranium takes millions of years to form.

Concentrated: One of the most concentrated forms of energy- a lot of energy is produced by a relatively small amount of fuel.

It is not affected by the weather: Does not require specific weather conditions to work.

It is easy to control the output of energy: Operators can easily adjust the power supply according to demand making it relatively cheap to produce.

Nuclear Waste: Every nuclear power station produces huge amounts of nuclear waste. This toxic material is impossible to dispose of. The solution has been burying huge cylinders underground. This will cause problems in the future.

Decommissioning: The process is very expensive and difficult. The sites are extensive and heavily polluted due to the amount nuclear waste stored. It is also known that sea water around the plants is contaminated, causing problems with the health of marine life.

Accidents: Since 1952 there have been 33 serious international accidents. These accidents range from explosions to the spilling of nuclear waste. Each has had a serious impact on the environment and on the populations surrounding the installations. In the case of Chernobyl, the world’s worst nuclear disaster, it occurred during routine maintenance work when a major fire broke out causing extensive radioactive releases which affected most of Europe.

Nuclear Energy is relatively cheap to produce, however it comes with a whole host of problems concerning the waste materials and how to deal with them. The process itself is dangerous if not properly managed. Accidents can be catastrophic and effect the whole world